I am far from a lady of leisure but slumming it camping at a traditional festival is just not something I can do. I  enjoy my creature comforts i.e. access to toilet, a mattress, quilts, running water. So when I reached an age where I could attend festivals, the only logical and thus most suitable choice for me was Wireless Festival. The fact that I can go home daily and be in my bed after a 30 minute journey on the Victoria Line, seemed like heaven to me. I went to Wireless once when it was cheaper and in its original venue in Hyde Park, however I took a hiatus. However a few years ago I started to live life again and I’ve attended the past 3 consecutive  years. I decided to do Friday & Saturday because my body is too old to do all 3 days and Sundays lining didn’t appeal to me. 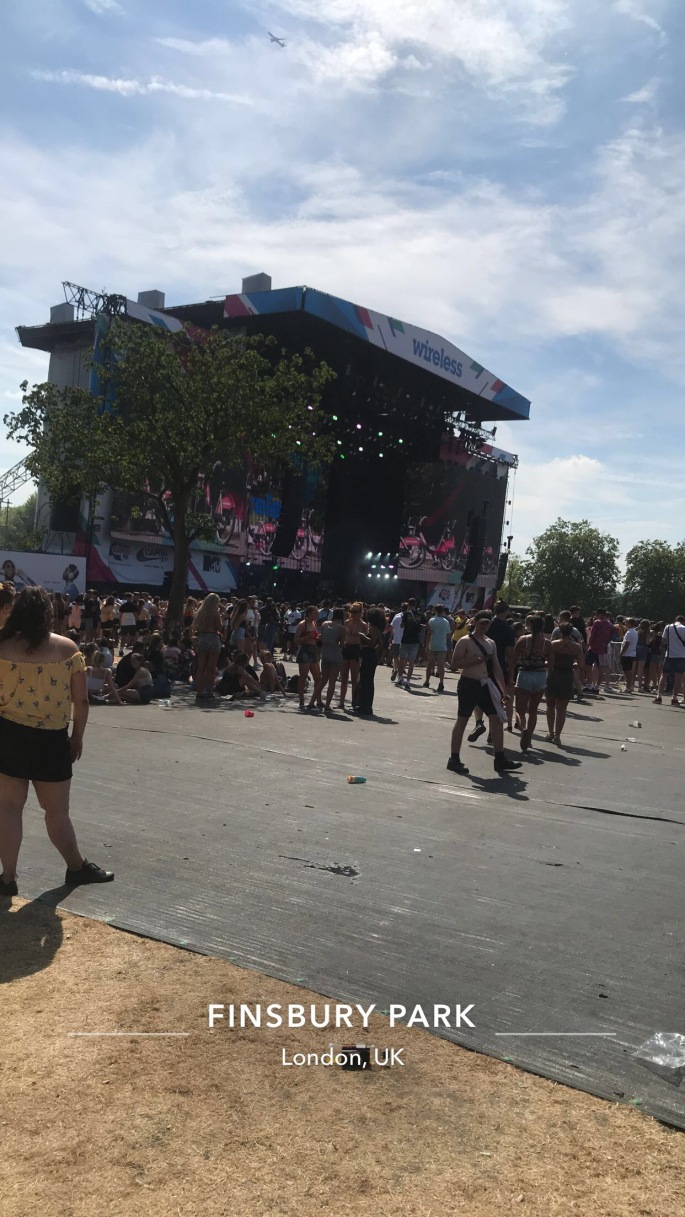 MO STACKZ – For some reason Mo Stack was performed on Friday rather than Saturday. This was an unexpected surprise, His DJ, Semo provided lit mixes and in all honesty Mo Stacks makes nothing but bangers

PARTYNEXTDOOR – PartyNextDoor was a nice vibe, I’m a major fan of his song, productions and song writing abilities nd  I remember being tipsy off Baileys reciting the words to “Recognise”. I feel like it was hard to translate his talent to the big stage because so many of his songs are slower tempo, sexual nature and it was daytime. I was so happy when he performed the songs his wrote for other people e.g. ‘Work’ and ‘Wild Thoughts – both originally performed by Rihanna

BIG SEAN – Big Sean definitely brought back the hype. I was an early Big Sean fan, so the fact that I finally got to see him was dope. He performed the major hits, which considering the fact that its only a 40 minute slot, is all I can ask for.

GOLDLINK – I briefly got to see Goldlink, who i love and I  sang his latest album like it meant something. I love ‘Mediation ‘ and ‘Crew’  for me was my song of 2017. His vocals and breath control are identical to album, so  he definitely did not disappoint

POST MALONE – I’m not a fan of Post Malone. The whole  un-bathed look does nothing for me and his said some problematic comments so it was background noise to me. His talented just not for me.

J.COLE – Friday was headlined by Jermaine Cole. This was  the second time I had seen him – both  times  at Wireless. The first time I was front row and I love it, he literally made eye contact with me and I  melted.   This year i decided to chill closer to exit and just soaked in the vibe. He performed the  old hits and some stuff off the new album

I know on the Wireless website, it says lineup is subject to change but this year Wireless took the piss.  They decided to show the England vs Sweden match on the main stage, I found this incredibly infuriating as I did not pay #70 to watch a football game, I could watch for free at home. I honestly believe it was a ruse to shield the fact that  J Hus, was no longer performing – something they decided to do out  of their own violation. In order to accommodate the screening they tried to open doors prematurely with little notice. I was only made aware due to the Wireless app. They were attempting to make Davido –  Africa’s no 2 – perform earlier than his original scheduled slot time and thus to an empty crowd.  Luckily they found sense and moved his performance to immediately after the match .

DAVIDO –  Davido himself was amazing and he played all of his major hits. Unfortunately the vibe wasn’t everything because the main demographic did not align with fanbase. That’s all  I’m going to say regarding that matter because it’s quite obvious what I’m alluding to. I just thank God I saw him on his ’30 billion’ tour months earlier.

FRENCH MONTANA -French Montana was lit. He has great stage presence and pandered to crowd amazingly with his decision to wear the England shirt, echo the chant “its coming home” and do a shout out  to J Hus. He makes nothing but bangers and ‘Stay Schemin’ reminds me of happier times. Also he has one of the best adlibs in the game “HUUUUHHHHH!”

MIGOS – Migos were also super hype but I couldn’t get over their wardrobe choice. Explain to me why Quavos was in a red puffer jacket. I dont care what Big Shaq says you’re hot. I can see the sweat dropping off your forehand. Honestly I just wanna know who dressed Offset in that long sleeve, thermal locking shirt and bootcut jeans. Regardless  i still managed to get my twerk on

STORMZY – The day was rounded off my headliner act Stormzy, who was performing his first headlining act, which was made more special by the fact that it took part in his hometown. They had a choir and the juxtaposition of dark skin Stormzy, in the freshest white tracksuit at nightime, was epic.